Thanatosdrakon amaru, meaning ‘The Dragon Of Death”, is one of the largest flying creatures that has ever lived. This giant species of pterosaur had a massive wingspan of 30 foot! That means its wingspan can compared to the lenght of a school bus. It was found by the team led by Leonardo Ortiz. A total of 40 bones and fragments were discovered by the paleontologists in the Andes. The rocks preserving the reptile’s remains dated back 86 million years to the Cretaceous period, which lasted from about 145 to 66 million years ago.

They didn’t have a current record of any close relative that even has a body modification similar to these beast. The researchers said that “Thanatosdrakon is the largest pterosaur that crossed the Cretaceous skies of South America discovered so far.” Researchers said that it is among the first creatures on Earth to use wings to hunt its prey from prehistoric skies. 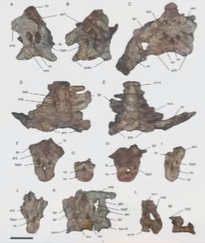